When it comes to photography (and most other facets of my life), I tend to be a bit of a winger. Planning and pre-planning does not come naturally to this guy. More often than not, the only thing I know about my next nature shoot is the trail I am going to explore, and which flavour of Nature Valley granola bar I am going to take with me….almond. I must admit, sometimes this renders favourable results as I set almost no expectations, and usually come away with something good, sometimes great. However, I am quickly learning that the lost arts of pre-visualization and pre-planning need to be utilized on a more regular basis.

There are tremendous benefits to pre-planning my shot before I put my car key in the ignition. For one, it saves me time. Knowing what I am going to shoot before I shoot it? How could that not ensure I maximize my time in the field and get back in time for the next gripping episode of Dexter. There is also the challenge of it all, especially to a self-admitted winger. Planning and pre-visualizing my next shot puts me outside my comfort zone, and I like that.

There is a lake on Texada Island called Heyshelt Lake, or Hayshelt Lake, or Hoyscholdt Lake, something to that effect (the jury is still out on the name of this gem and it hasn’t graced any map I have ever seen). It should be called Holy Shit Lake, because once you fix your eyes on it you won’t believe that a place this overwhelmingly stunning actually exists.

quarry lake on my first visit in 2009

It is a quarry lake, meaning that the rich minerals from the surrounding rock quarries are the reason this lake is the colour it is. Catching the beauty of this lake on camera, that was the easy part, real easy. I had been here twice before and knew I had to plan someting extraordinary for my third time around and I eagerly looked forward to the challenge. So, I pre-visualized.

I wanted to showcase diving/swimming in this island paradise, adding the human element (and thus creating a commercial/tourism ready image). The image became clear in my mind. I would be lake level and a diver would drop from the heavens overtop of me into the turquoise waters of Holy Shit Lake. All that was left was to catch the ferry with my models, and make it a reality! 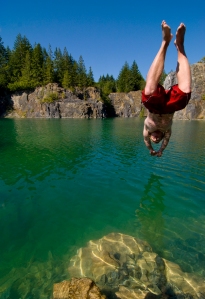 This shot existed in my mind for months, now it's a digital file

After that pre-shoot visualization took place, other shots surfaced in me noggin that I added to my checklist before shoot day. I wanted to get a shot of the jumper backlit with the sun bursting behind him. Check.

sun bursting off of diver contemplating how lucky he is!

I also wanted a shot illustrating the romance of it all….two good looking models frolicking in the sexy waters. Done and done.

A couple that dives together....

Several successful images, all pre-planned, captured within 30 minutes of each other…allowing me enough time to take many jumps into the lake myself. Afterall, Dexter was on summer break 🙂

Dexter would want me to jump!