Pre-emptive rant: So today’s blog isn’t necessarily about photography, it is more about life lessons caught on digital files 🙂

Advertising works! Sometimes though, in ways advertisers probably never expected, or hoped for. I saw a mildly amusing television commercial about giving the gift of computers and i-Phones to your family and friends so you can all have a “virtual Christmas” this year. Who needs to actually spend quality time together when modern technology allows us to creep each other through tiny, buffered windows all season long? Well the commercial got to me. No, I didn’t hit the local electronics retailer and dump a few thousand dollars on gadgets. Instead, I grabbed my camera and my four year old daughter and we headed up Duck Lake Road for some real winter family fun. With technology advancing so rapidly these days, my mission was to show my daughter how we used to have winter fun back when I was a kid. You know, the days when Atari and Pong were at the forefront of innovation.

The snow that was falling in the area was awesome!

Duck Lake after first snowfall of the season

Powell River got hammered with the white stuff, so hunting down a good play area for snowman building, angel-making and good old fashioned snowball throwing was rather easy. No ski resorts, no fancy sleds, no snowmobiles, and best of all, no handheld gadgets to distract us from daddy-daughter interaction. I just wanted to see how much fun she could generate with her own imagination. And the moment we stepped out of the car near Haslam Lake she put that imagination to work. 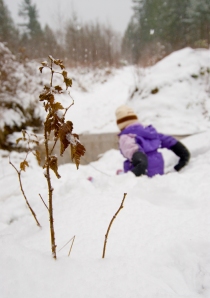 Her winter playground consisted of nothing more than a short slope, a partially frozen pool of water and a heap of fresh falling snow. We spent nearly an hour here having sliding contests, breaking the ice-pool with rocks and arming ourselves with snowballs, just in case a cougar decided to show his face. Good thinking huh?

We then continued down the road to where the Blue Trail meets the road. Nothing terribly special here in the way of roadside attractions, but the snow was intense here and Sadie just couldn’t wait to get back out into the thick of it. This time, our goal was to make a huge snowman that would wave at any like-minded adventurers that decided to pass on Facebook in favour of a more natural reality.

Once the three-tiered snow dude was built to our satisfaction, my daughter came to an unsettling realization.

“Daddy, what are we going to use for his eyes, nose and mouth? Did you bring any carrots?”

Um, no. Thinking quickly, we slipped into a trickling creek on the side of the road and I asked her to find the best pair of rock eyes she could find. His nose was nothing more than two broken twigs forming a triangle. His mouth was a piece of fern that we shaped into a smile. His arms? Deadfall.

Voila! My young apprentice-of-life is now armed with the necessary skills to pull off an impromptu snow being whenever called upon. 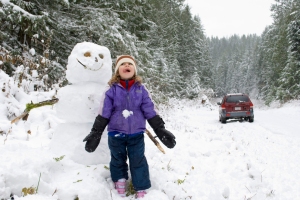 Here comes our first passer-by! So we pose together like a couple of hams beside our new friend and wave as the vehicle’s occupants wave back with enthusiasm. They looked genuinely happy to see such a simple moment in a rather complex day and age.

I could tell my daughter did not want the day to end just yet. Neither did I. So Sadie decided we needed to build another snowman on the other side of the road, one that could greet drivers coming from the opposite direction. Again, good thinking.

Two snowmen later, I could see that the winter daylight was fading quickly. Plus Sadie’s hands were now wet and she could no longer ignore the discomfort, as much as she wanted to. So we hopped into the car and headed towards home. Normally when we drive, we listen to our favourite songs on the cd player. But this time, Sadie wanted nothing more than to open up her window and listen to the snow fly past, still trying to catch some in her mouth.

It’s like we just spent the entire afternoon, totally unplugged from the modern world, while completely plugged into the moment and each other’s company.

That night, after many hugs and snuggles from my worn-out daughter I thought again about that commercial earlier that day. Those advertisers were absolutely right. I do need to go shopping ASAP…

…for a warmer, more waterproof pair of child’s winter gloves for the next time the snow flies on the Sunshine Coast.

I love discovering new tricks in Photography. Especially tricks that save me money by not having to purchase new equipment. Case in point is this constant nagging in my consumer-driven psyche to purchase a Lensbaby lens to capture that dreamlike, selective focus effect that I fall for every time. I know that the lens would have been quite fun to play with…for about a week. After which, it would likely stay buried deep in my camera bag talking about its glory days with my never-again-used Armageddon Red ND Filter that I just had to have when I first started photography. A filter that would turn any sky a deep, unrealistic red. Good impulse buy Robinson. Real good. That filter rendered one good image in the several years I have owned it and the minimal times I even used it. 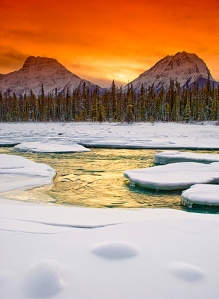 Aliens are coming...to get my red filter

So here I was contemplating another ridiculous spend, when my good friend and pro photographer Kelly Funk passed on a great tip in Photoshop that will produce the same effect as a Lensbaby…when applied correctly. It gives you that dreamy, hallucinogenic-mushroom, Disney Viewmaster type of look and feel. Basically allowing you to keep one element of your image in sharp focus (subject), while blurring the rest of the image elements to look like you just put in eye drops. This effect is used mostly in wedding photography. I don’t see it too often in nature photography, so I thought I would give it a try.

Here is an intimate shot of Lois River near Eagle Falls in Powell River. The colour of the main rock in the image jumped out at me when I captured this shot last year. I thought I would apply the selective focus technique to really make the rock pop. Nothing against the original image, but adding this new application made me fall for this shot in a new way.

As captured in camera 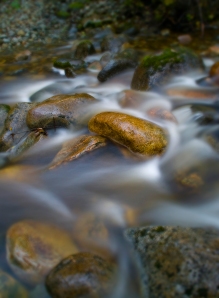 Here’s one of my favourite shots of Saltery Falls, the very first bit of eye-candy you get when you start the 180 km Sunshine Coast Trail. I set up this shot on my tripod and used my self timer to add the human element to a magnificent natural scene. By placing a person in the shot, me, the image becomes more appealing to tourism marketers. Again, I like the original shot just fine. But there is something so cool about the new and improved shot post-effect.

Here’s one last example of the effect as applied on this panoramic interior shot of Powell River’s historic Patricia Theatre. Once again, the sharp-as-a-tack image is commercial ready in itself, but considering it is like a time-warp inside the theatre I would try that effect here.

The selective focus method has made me go back into some of my old files for some reworking. It is a lot of fun to see images you forgot you had and bring them back onto your desktop. I anticipate a whole lot of experimental fun with this new technique….for about a week 🙂

But that is ok, because this kind of fun cost me nothing. I am completely guilt-free and I didn’t have to add any more weight to an already back-cramping camera bag. And my Armageddon-enducing Death Filter? It is now a lovely colourful beer coaster for my cold bottle of Miller. Reduce, Re-use, Re-cycle.

PS. For those that want to know how to apply the selective focus effect in post, visit http://www.elementsvillage.com/forums/showthread.php?t=47882

Tunnel vision to the extreme

So those of you that know me and my photography, likely know that my passion is outdoor/landscape/nature imagery. I don’t delve too much into the world of portraiture. You know, the world that actually pays!! But photography to me, has never been about the cash. I know, how Eddie Vedder of me to say, but I gain more satisfaction from the art of photography, rather than the financial gains. The truth is though, the business realities of photography simply shouldn’t be ignored any longer. Besides, expanding my business to include portraiture doesn’t mean I cannot incorporate nature into the assignment shoots, right?

So when my friend, a local realtor, asked me last week if I wouldn’t mind providing him with some professional headshots, I immediately thought – what better way to see if this portraiture-world was right for me. Or at the very least, see if the whole experience would send me running to the nearest waterfall, frantically trying to re-ingite my lost love for the finer art. Ok, I’ll give it a try.

We started off at the Powell River Rec Complex. Beautiful trees with fall colours and an awesome bridge pathway made for great backdrops. It didn’t take too long to discover that I actually kind of like this 🙂

We then headed to Townsite, which would offer up a chance to put Josh in front of some character homes. He is a realtor, made sense to show him being one 🙂 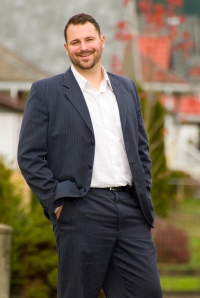 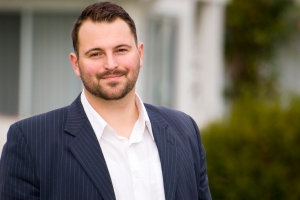 We then decided to hit the lake. Incorporating even more nature into this shoot? I’m in. Josh even decided to skip a few stones at the end and show even more personality. Keeping your models comfortable is key to any good shoot and I could see Josh really starting to find his groove. 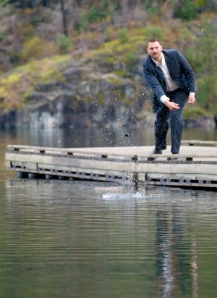 We were getting some really good stuff, so we thought we would try one more locale to make sure we got everything we needed. I am really glad we did because this last spot rendered what I believe are the strongest images. A rustic wood deck and chair was all that we needed to round out a fairly successful portrait session. 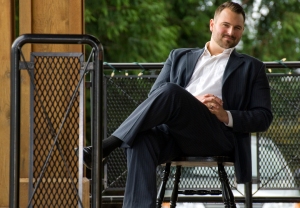 All in all, I am quite pleased with the overall experience. I discovered that shooting people can be just as rewarding as catching a mountain reflection on a lake. And in my case, even more challenging. With that said, I will now be putting together a plan to expand Darren Robinson Photography to offer portraiture services in the near future. Feel free to contact me if you are interested in learning more about them!

I do admit however, that my very next shoot will likely involve silence, the outdoors, and likely a whole lot of nature, without the human element 🙂